The Robotic and Minimally Invasive Urologic Surgery Program in the Department of Urology at Atrium Health Wake Forest Baptist is one of the most advanced programs of its kind in the country. At the helm is Director Ashok Hemal, MD, who is internationally known for his pioneering work in minimally-invasive surgery, specializing in uro-oncology, robotic and pure laparoscopic surgeries. He has helped develop many of the surgical protocols in use worldwide today. At Wake Forest Baptist, he uses the technology for surgeries of the prostate, kidney and bladder as well as for female pelvic organs.

He reports having the world’s largest experience using the technology to repair fistulas, or abnormal openings between the bladder and vagina. He has also published reports comparing robot-assisted surgery with conventional surgery for cases of kidney cancer and is a world leader using robot-assisted and laparoscopic surgery to manage bladder cancer. Hemal is a fellow in the International College of Surgeons, the American College of Surgeons and the National Academy of Medical Sciences. He also serves as research director at the Comprehensive Cancer Center of Wake Forest Baptist.

With robot-assisted surgery, the instruments and a small camera are inserted through four centimeter-size incisions in the abdomen. The surgeon controls the four robotic arms with hand and finger movements while viewing the surgical site on a screen. The instruments are modeled after the human wrist and allow for full dexterity. The tiny instruments – as well as the ability to see the surgical site at tenfold magnification – allow for very precise, refined movements.

The advantages of the minimally invasive procedure include less blood loss, a shorter hospital stay and a quicker return to normal activities. The patient's symptoms were relieved and her kidney function was improved. 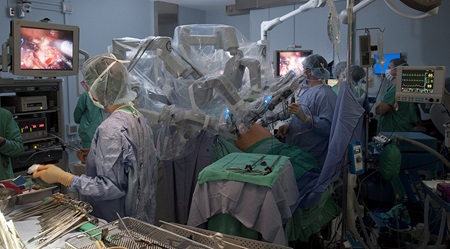 Robotic Radical Prostatectomy - RRP is a procedure that has emerged as an attractive option among the surgical alternatives for men with early-stage prostate cancer. Our experts are achieving equivalent results to the standard open surgical approach with smaller incisions, less pain, less blood loss, fewer complications and shorter recovery times.

The benefit from using the robotic assistance is that the surgical field is magnified 10-15 times and the robotic arms with tiny instruments allow the surgeon to operate in a narrow area as if his own hands were inside the body doing the operation.

Robotic Partial Nephrectomy - A kidney sparing procedure to treat kidney cancer in which the tumor is removed. Partial nephrectomy can be performed through an open incision or robotic-assist laparoscopic surgery and offers the benefits of sparing the kidney and saving kidney function.

Robotic Radical Nephrectomy - A procedure that removes the entire kidney, as well as the fat surrounding it, and sometimes the adrenal gland and lymph nodes. Patients who undergo this operation have a kidney disease or injury, kidney cancer, or because they are donating their kidney.

Robotic Radical Cystectomy - When bladder cancer is invasive, all or part of the bladder may need to be removed in a procedure known as cystectomy. Depending on the extent of the cancer, your surgeon may advise a partial cystectomy or a radical cystectomy. Generally, cystectomy is done through an incision in the belly and can be done laparoscopically.

Robotic Sacrocolpopexy - A minimally-invasive type of surgery done to repair pelvic organ prolapse during which the tissues and organs are moved back into place.

Robotic Pyeloplasty - A technique to perform reconstructive surgery of a narrowing or scarring where the ureter – the tube that drains urine from the kidney to the bladder – attaches to the kidney through a minimally-invasive procedure.

Robotic Ureteral Procedure - Repairs the connection between the ureter and the bladder.