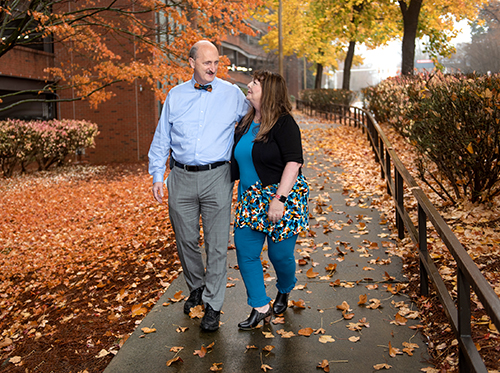 Kim Moser had known about her hiatal hernia since 2017, but when she began to feel extreme fatigue, she needed expert surgical care from Atrium Health Wake Forest Baptist to restore her to health.

Along with fatigue, Kim, a resident of High Point, began to experience a problem with low iron levels in her blood. The problem became severe enough that she had to go to the Hayworth Cancer Center at High Point Medical Center to receive iron infusions every four to five months.

“I was tired all the time and extremely short of breath,” Kim said. “Everyone wanted to blame it on my weight, but I knew something was terribly wrong.”

A hiatal hernia is a condition where the stomach herniates into the chest, causing problems with swallowing, shortness of breath and ulcerations of the stomach. An endoscopy revealed how large Kim’s hiatal hernia had become. High Point gastroenterologist Dr. Mary Shearin referred her to Dr. Andrew White, a specialist in bariatric and minimally invasive surgery at Bariatric Surgery — Westchester in High Point.

“She had a large hiatal hernia, and the ulceration associated with it was causing a slow bleed,” Dr. White explained. “We were able to fix her hernia laparoscopically, and she did very well after the surgery, with no issues.”

Kim said she appreciated how Dr. White approached the procedure.

“He was so kind and understanding and made me feel comfortable having the surgery,” Kim said of Dr. White. “Little did we know that half my stomach was in my chest.”

Kim, who has had 14 surgeries throughout her life, called the laparoscopic repair “the best surgery I have ever had.” It has allowed her to breathe normally again and to stop using an inhaler. With her ulcer and the resulting slow bleed repaired, her iron levels returned to normal.