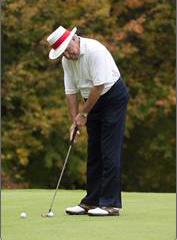 Russ Decker was in pain for almost a year. Prednisone and medication helped, but the pain would always return, causing him to limp and wake up at night. Finally, Russ learned he needed total hip replacement surgery.

Russ and His Surgeon Select the Anterior Approach

The anterior approach is a minimally invasive hip surgery. This is important for patients, who want to return to work and daily activities as soon as possible.

The procedure uses a specially designed HANA® (hip and knee arthroplasty) orthopaedics table allowing the physician to manipulate the patient’s leg so he can access the hip from the front, versus the back. The result is less tissue damage than with traditional surgery.

During the operation, the doctor accesses and replaces the hip joint between muscles, rather than detaching muscles from the pelvis and femur. Preserving the muscle attachment is the key to less pain after surgery and greater hip joint stability.

Patients are usually able to bear full weight soon after surgery. Risk of dislocation is lower because the incision size is smaller and the muscles that support the hip joint are still intact.

Not all hip replacement patients are eligible for this surgery. For example, patients with previous fractures or defects may not be candidates.

Russ Hits the Golf Course One Month After Surgery

Russ had his surgery on Wednesday, left the hospital on Saturday, and walked into church with the help of a cane on Sunday. Before long, he threw away his cane and was back to golfing.

“I didn’t have any real pain,” Russ said. “Every once in a while, I took some over-the-counter pain medication, but that was it!”