A Miracle for Baby Hugo

Historically, most patients with type 1 SMA did not survive beyond 2 years old without chronic ventilation. Hugo received a new treatment for SMA called ZOLGENSMA® at Brenner Children’s. This is a new therapy that targets the genetic root cause of SMA. A one-time-only dose replaces the function of the missing or nonworking survival motor neuron 1 (SMN1) gene with a new, working copy of a human SMN gene. 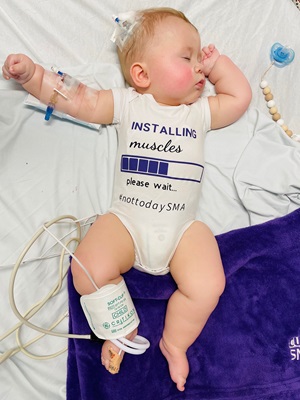 “Hugo is driven, and the perfect mixture of sassy and sweet,” said Ashley Sager, Hugo’s mother. She said her son’s diagnosis was exceptionally difficult, especially since she had grown up watching her brother fight his own battle with SMA.

“Hugo is our rainbow,” said Ashley. “Some of those ever looming clouds are lifting as I see the miracles continue to reveal themselves. The medical sciences have created a game changer for treatment of SMA. I want to thank the Brenner’s neuromuscular team. I couldn’t ask for more for my child or myself. I am eternally grateful.”