A Big Surgery for a Small Patient

A mother’s instinct is rarely wrong. When Bekah Stephens of Hickory gave birth to twins Hunter and Greyson, she picked up on a problem with Greyson right away.

“Pretty much immediately I knew there was something that was just different,” says Stephens. “I wouldn’t say I knew it was a problem at that point, but I did feel very aware that things weren’t as they should be.”

Greyson would make a clicking sound when he’d nurse. The lactation consultant noticed it too. The Stephens’ pediatrician got involved and referred them to Dr. Daniel Kirse, pediatric ear, nose and throat doctor and head/neck surgeon at Atrium Health Wake Forest Baptist. This was when Greyson was four months old. By that time he was losing weight and having a really hard time with nourishment. Stephens had already switched to a bottle at that point, and Greyson’s tongue was getting enlarged on one side.

A Rare Form of a Childhood Cancer

After meeting with Dr. Kirse and having an MRI done on Greyson, Bekah and her husband, Kyle, had a decision to make. They had to decide whether Greyson should have a biopsy taken from his tongue.

“Initially, they didn't think it looked like any type of cancer,” says Stephens. “They actually thought it was an arteriovenous malformation. So then we had to make the difficult decision of whether or not to biopsy, because if it was that, a biopsy would be dangerous — he could hemorrhage and bleed. But if it was cancer and we didn’t biopsy it to find out, that could be really bad too.”

Dr. Kirse helped guide the family through the decision. “He spent I don’t know how long with us on the phone, on his own time,” says Stephens. “I called him and told him I was on the fence, and he spent a long time talking us through everything even though we already had the notes. We just needed his guidance and support in the decision, and he more than delivered.”

Ultimately, Stephens’ instincts came into play again. The family decided the biopsy was worth the potential risk. This ended up being the right decision — the biopsy showed that Greyson had a childhood cancer known as Ewing’s sarcoma. The form he was diagnosed with, however, was atypical. Typically, Ewing’s sarcoma affects the bones rather than the tongue. This is why there was initial hesitation about the biopsy of the tongue. It was also unusual for a baby Greyson’s age to be diagnosed with the cancer; it usually impacts older kids.

Following chemotherapy for the cancer, Greyson, at just over a year old, would need to have part of his tongue removed and reconstructive surgery performed. This was not a routine surgery. In fact, prior to Greyson, this kind of surgery had never been performed on a child as young as him.

It was a well-managed process. Prior to the surgery, the progress of the chemotherapy was monitored. Initially, the cancer took up nearly 70 percent of the tongue; the doctors wanted to get that percentage down. And there needed to be a recovery period for Greyson’s immune system to bounce back following the chemo.

Then there was a matter of how the procedure would be performed. Typically, a skin graft is taken from the wrist, but because of Greyson’s small size, it had to be taken from behind his shoulder blades, what’s known as a parascapular surgery. Dr. Kirse and his colleague, Dr. Dale Browne, performed the groundbreaking procedure. Dr. Browne is also a head and neck surgeon at Wake Forest Baptist, as well as a head and neck oncologist. 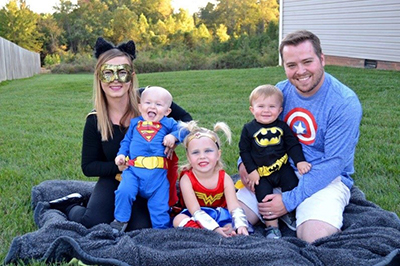 Following surgery were months of life adjustments and close monitoring in the Stephens household. Swallowing was a problem for him, so he had to be under close watch and only have certain liquids to eat.

But after all that little Greyson has been through, he’s now a happy 4-year-old boy who is finding “his normal,” which includes lots of play time with his twin brother, Hunter, and his older sister, Harper.”

He still undergoes speech therapy and occupational therapy to learn to adjust and compensate for a reconstructed tongue as he grows.

“His age is an advantage,” says Stephens. “He didn’t have all these prior experiences (of taste and speech) that he’s missing out on. He’s just so full of joy and so full of life.”

Stephens says he even enjoys going to visit his doctors. “It's crazy where we came from,” she says. “It was the biggest scariest time of, of our lives. But we had his oncology team checking on us all the time. And Dr. Kirse was right there checking in on us all the time, and guiding us. He’s so amazing; I can’t say enough about him.”