Early Intervention Puts Newborn on the Road to Recovery

Thanks to a newborn exam, Magnolia Thompson is healing from developmental hip dysplasia. 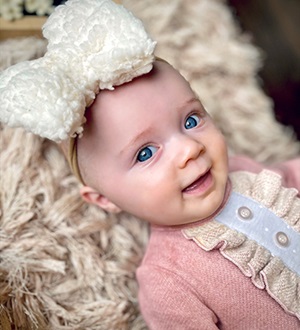 Magnolia “Maggie” Thompson was born at Wake Forest Baptist Medical Center on August 18, 2020. Because Maggie was delivered at our Birth Center, an onsite pediatrician and care team were able to complete her initial postnatal medical evaluation while she was still at the hospital. During the exam they found that Maggie had a type of hip dysplasia that can sometimes affect newborns. Thanks to this early discovery, Maggie was able to begin treatment right away.

Within 24 Hours of Birth

Maggie was initially breech, says her mother, Hannah Thompson of Davidson County. “That was up until about 35 weeks, then she turned herself,” says Thompson. “We had no other indication that she was going to be born with any kind of issue.”

It wasn’t until after Maggie had been born and received her post-delivery exam that a pediatrician realized there was an issue — congenital dislocation of the hips, sometimes known as “clicky hips.” The next day, Sheila Mason, a pediatric orthopaedic nurse practitioner confirmed the diagnosis. Sheila is able to complete in-hospital evaluations for concerns that otherwise would have not been addressed until an outpatient appointment. This allows family to focus on the transition home with their newborn and less on additional appointments in the first few days of life — or unanswered questions regarding the exam findings.

“I love caring for children with developmental hip dysplasia, as it’s often treatable without surgical intervention if caught early. It’s a condition I can watch improve, which is rewarding. Appropriate treatment positively impacts a child’s life forever. I enjoy building relationships with families starting at the newborn age, and I get the joy of watching them grow and thrive throughout childhood and adolescence!” -Sheila Mason, nurse practitioner, Pediatric Orthopaedics

“As we were discharged from the hospital, we were sent to get a brace, which she would immediately have to start wearing 24 hours a day,” says Thompson. “As a first-time mom, it was an emotional experience to go through all of that so quickly. But in hindsight, we’re glad we were able to start treating her right away.”

Little Maggie had to wear what is known as a Pavlik harness, which is a type of splint that keeps a baby’s hips positioned to promote improved development of the hip as the child grows. This presented interesting challenges for Thompson. Changing diapers and giving baths while Maggie was in a brace definitely took extra effort, but it all eventually started coming together, and both baby and family adjusted.

At two weeks of age, Maggie had an ultrasound that showed her hips were stable. This was great news, but there is more progress needed before Maggie no longer needs the brace. Her hips need to completely “set.” So following the ultrasound appointment, Maggie was able to start wearing the brace 23 hours a day rather than 24. “This gave her a chance to have a better bath time and a small amount of brace-free play,” says Thompson.

Developmental hip dysplasia truly is developmental, meaning the hip develops occurs gradually over time. Once the hips are stable, brace wear continues for 23 hours a day for 4-6 weeks, The practice then transitions to night and nap time until an average of 6-12 months of age. After bracing, the pediatric orthopaedics department continues to follow the patient through childhood as the hip is continuing to develop.

Thompson is a speech therapist; she’s accustomed to slow, steady progress. Her training and occupation have helped her have a healthy perspective on her daughter’s healing process.

Maggie has continued to have ultrasounds so that her progress can be monitored. Thompson says her hips continue getting better. Right now, Maggie only has to wear the brace between 10-12 hours a day — usually at night when she’s sleeping. Her next goal is for the ossification of the femoral bone head to begin and become equal on both sides. This typically occurs when a baby is between ages 7-8 months.

As Maggie progresses in the healing of her hips, she’s thriving in all other areas and hitting all the developmental milestones that are normal for her age.

A Team Prepared to Treat Newborns

Hip dysplasia in newborns is not rare. It tends to be more prevalent in firstborns, girls and babies who are breech during pregnancy. If not caught early, however, the dysplasia can be serious enough to warrant surgery and a hard cast.

“The early intervention was a blessing,” says Thompson. “They discovered this at bedside while we were still in the hospital. While it was hard and emotional at the time, we’re grateful we were able to be proactive in the healing process. Her hips were able to set back in the sockets without surgery.”

Thompson says her training as a speech therapist has shown her that early detection is a key to success for almost anything.

In Maggie’s case, early detection was made possible by the prompt, attentive care of the pediatrics team at Wake Forest Baptist Medical Center. With the new Birth Center being located within the hospital, pediatric orthopaedics is able to make prompt interventions based on the examinations following childbirth.

Thompson credits Dr. Matthew Ravish, pediatric orthopedist, and Sheila Mason, nurse practitioner, for helping their family through this emotional time. “They have always answered any of my questions any time I’ve had questions — nothing ever goes unanswered,” says Thompson. “We always feel confident that we know what we need to do and what’s going to happen at the next stage.”