In the late summer of 2014 Mia Blochaviak was an excited college freshman about to find out what life away from home in Taylorsville, NC, was like.  She was optimistic about what the year would bring and excited about her role as a scholarship player for Erskine College softball.

As an outfielder in varsity softball at Alexander Central High School, Mia won numerous awards, including All-District, All-State, NFCA 1st Team and All-South First Team. She was an All-American nominee and state MVP.

Mia had the enthusiasm of a practiced athlete and the fortitude of a serious competitor. But what she didn’t expect was that her outfielder’s stamina would soon carry over into all the other parts of her life, and to her friends and family around her.

It was August, and Mia and her mom, Lisa, were happily taking care of Mia’s supplies and preparations for her freshman year in college.

In addition to making sure she had some fun décor for her dorm room, Mia’s preparations included immunizations and a health physical. She also wanted to be checked for strep throat, since she’d felt a lump on the inside of her neck.

A doctor in Hickory diagnosed the lump as a very swollen lymph node, prescribed the appropriate medication, and told Mia to come back if the swelling did not go down in about a week.

The lump did not decrease. Mia was referred to an otolaryngologist, or ear, nose and throat specialist (ENT). An ultrasound during that visit confirmed that the lump was a tumor. An emergency biopsy seemed to show that the mass was benign.

Mia was calm and positive during the procedures, worrisome as they were. Her parents decided they’d like a second opinion from Wake Forest Baptist Health. They knew Wake Forest Baptist had a strong reputation as an academic medical center, and Lisa and Steve Blochaviak wanted further information about their daughter’s condition.

Mia saw Dale Browne, MD, chair of otolaryngology. Since the mass appeared to be a tumor within her thyroid, he recommended scheduling her for surgery to remove it. The operation would take place in December at the end of that fall semester at Erskine.

Mia went on to finish the semester before her surgery without apparent complications. She went to class, enjoyed her friends and played through her fall season of softball.

“The only difference I noticed,” she said, “was how much I was sleeping. I took three-hour naps during the day and still slept a full eight hours at night.”  Mia dismissed the sleeping as her body’s way of adapting to the transition of living away from home.

December came, and in the week before Christmas, Mia was in the hospital about to have surgery. “Dr. Browne’s plan was to remove my right thyroid, and test the tissue to see if the tumor was malignant. In the waiting room, my parents got a call to inform them the tumor was not benign, and to ask their permission to remove the left side, as well.”

The surgery went well and Mia was discharged the next afternoon.

Mia Blochaviak “I was diagnosed with papillary carcinoma,” Mia said. “When I finally processed this, my reaction was, ‘okay, what’s next?’ I’m adamant about pushing forward and being proactive in any situation, and this one wasn’t going to be any different. I would get through this with a smile.”

Mia said that throughout the process, Dr. Browne was extremely optimistic about her treatments and diagnosis, always telling her, “If it were my daughter in your situation, this is what I’d do.” She said this was very comforting to her and to her parents and kept their spirits and their confidence high.

“My surgery was only a week before Christmas, and I had a ton of visitors,” Mia said. She said her high school coach, Monty Sherrill, was among those who were particularly supportive during her experience.

Mia’s friends and family were inspired by her optimism. She always made sure to have a smile on her face no matter what. The cheery smile worked for everyone around her, and usually for her own inner feelings. But not every time.

“One night after my visitors had gone home for the evening,” Mia said. “I went and looked in the mirror and said out loud: ‘I have cancer.’ And I just cried for a few minutes. No one knew; no one saw; no one heard me.“

With the matter-of-fact confidence that comes from the lessons of team athletics, Mia said that was the only time her optimistic outlook wavered. She said the positive support from her medical team was crucial also.


Treatment by a Multi-Disciplinary Team

A unique aspect of how Mia was treated at Wake Forest Baptist was that before and after the surgery, Mia has had the support and guidance of the Wake Forest Baptist thyroid services team in a clinic for thyroid cancer and other endocrine neoplasias. Mia saw Dr. Browne first, and then Dr. Brittany Henderson, an endocrinologist, because patients who have a thyroid nodule or other suspicious mass see an endocrinologist as well.

“In the same visit, the patient has an ultrasound, biopsy, and gets a preliminary report as the surgical procedure and any side effects, and the date and time of the surgery are scheduled that same day,” Henderson said.

“In addition to saving patients and families multiple trips for doctor visits and tests, there is the advantage that as a patient, you have your whole team talking together, and you are part of the team,” said Henderson.


She Gained a New Skill in the Process 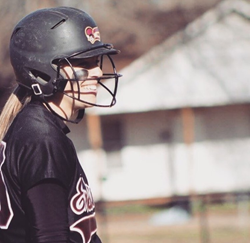 After her surgery, Mia had regular check-ups every few weeks through winter and spring, but no other treatments until the summer. She said, “I did a round of radioactive iodine which was an adventure in itself.” (Radioiodine therapy is used to destroy any thyroid tissue not removed by surgery.) Mia said, “I had to be isolated for a little over a week, and ended up teaching myself how to play guitar!”

Mia is now in overall good health.  Henderson said Mia’s disease is now in remission, “But we continue to see our patients all life long. The way our team works, she still checks in with Dr. Browne, then sees me for post-operative lymph node mapping to see if she has any kind of recurrence. We can do that in the office that day, and she can leave knowing whether the answer is yes or no.”

In spite of Mia’s bout with one of the most serious diseases of our time, she maintained her studies and her softball. She is now a senior majoring in psychology, working as a research assistant, and playing as a starter on the Erskine softball team, the Erskine Flying Fleet.

Mia is very active in campus organizations, including serving as president of Alpha Lambda Sigma Literary Society and Female Athletic Representative for the Student Government Association. She is also doing undergraduate research in psychology. “I’m currently working through some experiments in the area of forensic and legal psychology,” she said, “and am hoping to be published in a scholarly journal.”

Mia plans to go on to graduate school next year to pursue a doctorate in psychology. “I’m healthy and happy, and excited to move forward in life with cancer behind me,” she said.
Skip Social Links
Skip Topics