Pamela Breedlove is the first patient at Hematology and Oncology – Wilkes to complete cancer treatment and ring the “victory” bell since the opening of the clinic in August of 2020.

When an enlarged lymph node on Pamela’s underarm increased in size, she decided to bring it up to her primary care physician who she was scheduled to see in a few days for a routine visit. 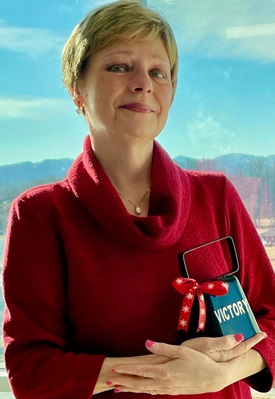 “My previous doctor told me that my lymph node was not swollen and that it was nothing to worry about,” said Pamela. “He retired and I began seeing Dr. Kim Kinsley at Wake Forest Baptist Health Family Medicine - Jonesville; she is the one who referred me to get additional testing.”

“It was scary time,” said Pamela.” “I’ve never really been sick; I’ve always been healthy and never thought anything like this would happen to me.”

Hematology and Oncology – Wilkes is part of Wake Forest Baptist’s Comprehensive Cancer Center network. It is the only cancer center designated by the National Cancer Institute in the Triad and western North Carolina, and is one of only 51 in the country.

The Wilkes medical oncology team works with other Wake Forest Baptist radiation, gynecologic and surgical oncologists to ensure a multidisciplinary approach to cancer patients, with deep expertise in all types of cancer, from the most common to very rare diseases.

“Pamela was one of the first patients I had the pleasure of seeing since the opening of Hematology and Oncology - Wilkes,” said Dr. James Atkins, medical oncologist. “I treated Pamela with the standard regime of care for non-Hodgkin’s lymphoma called R-CHOP. Each letter stands for a different drug. These chemotherapy drugs are given either intravenously or orally and work together to target and kill cancer cells.”

After just three treatments, Pamela was informed she was cancer free. Pamela received her final treatment on December 23, 2020.

“We do things a little different at Hematology and Oncology – Wilkes when someone completes their cancer treatment,” said Dr. Atkins. “Our nurse manager, Michelle Kennedy came up with the idea to have a personalized cowbell for each patient to ring and they get to take it home. When they look at it, we hope they can acknowledge the tough journey they went through and that it is now behind them.”

“At first, I didn’t want to ring the bell. I’m not a very ceremonial gal,” said Pamela. “After finishing my last treatment, I heard that my cancer team had something for me. It was a personalized cowbell with the word victory on one side and the signatures of my team on the back. Needless to say, I rang that bell and I know I rang it pretty good. My team rallied around me and my nurse practitioner, Erica Shore even called in on her day off to be part of the moment. It was a great feeling.”

Pamela wants those diagnosed with cancer to know that a positive attitude and having a care team you can trust plays a big role in recovery.

“When you know you’re in good hands, it’s a lot easier to be positive,” said Pamela. “From the moment I met Dr. Atkins and his team, everything has been excellent. They quietened the unknown with information, quietened my fears with hope, and treated my anxiety without judgement and with compassion and understanding.”

“We are blessed with one of the friendliest teams you will find,” said Dr. Atkins. “We want you to reach out to us when you need us and most importantly we want you to come out on top after looking cancer in the face.”