Surgery for epilepsy is brain surgery. There are various types of epilepsy surgery:

The vagus nerve stimulator, which controls seizures by sending electrical pulses to the vagus nerve, can be implanted on an outpatient basis using a single incision. Wake Forest Baptist was instrumental in the nine-year research effort leading to the device's approval and was the first hospital in the United States to implant the device in a patient.

In order to determine if a patient with epilepsy is a candidate for surgery, tests need to be conducted to help pinpoint where in the brain the seizures originate. Patients at Wake Forest Baptist undergo monitoring in our six-bed Epilepsy Monitoring Unit where the following tests may be performed:

Once the seizure focus is located, a patient may be a candidate for surgical resection. Surgical removal of the epileptic focus has been successful and safe in adults and children of all ages. These surgical approaches are especially beneficial for children with epilepsy, who can be spared the learning and developmental problems associated with poor seizure control.

In the first randomized, controlled trial of surgery for epilepsy, researchers found that surgery is far more effective than medical therapy for treating drug-resistant epilepsy (New England Journal of Medicine, August 2, 2001). Complete seizure control is achieved in 70 to 80 percent of patients; another 10 to 15 percent have a significant reduction in frequency and severity of seizures.

At Wake Forest Baptist, neurosurgeons Daniel Couture, MD, and Adrian Laxton, MD, are world leaders in using laser therapy to treat epilepsy. The Comprehensive Epilepsy Center is internationally recognized for the diagnosis and effective treatment of epilepsy. From a state-of-the-art epilepsy monitoring unit to advanced diagnostic mapping, our team of multidisciplinary epilepsy specialists is fully trained and experienced in treating patients of all ages. 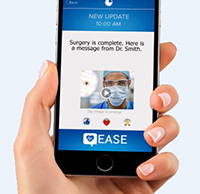 EASE, is a HIPAA-compliant cell phone application that allows an assigned nurse in the operating room to update approved loved ones on the status of a patient’s surgery in real-time.

A hotline managed by internationally known epilepsy expert, Patricia Gibson, the epilepsy information service handles more than 8,000 calls per year from both physicians and patients seeking information about epilepsy, the latest treatment options and support groups.

Preparing for Your Surgery

In 2014, she discovered an unusual lump in her pelvic area.
Watch Her Story
LIFE-CHANGING CARE

“They saved my life, it was a miracle.”
Watch His Story
LIFE-CHANGING CARE

A New Heart and a New Life

At Atrium Health Wake Forest Baptist we understand the importance of referrals. Our Physician Liaisons partner with referring physicians in our community and beyond to provide information on our physicians and clinical services. Full list of new physicians.