One Family's Stand Against Alzheimer's

"Supporting state-of-the-art research like this is something that we have to do. We have to keep it going." - Doug Hartman

Every 65 seconds, someone in the U.S. is diagnosed with Alzheimer's disease, the sixth-leading cause of death in the country. More than 5.7 million people are estimated to be living with the disease right now. For a family facing statistics like this, numbers can be daunting. But as one man's family in Texas demonstrated, philanthropic investments into research can create exponential change. Here is their family's story. The Office of Philanthropy and Alumni Relations can help you explore creating your own family's story. 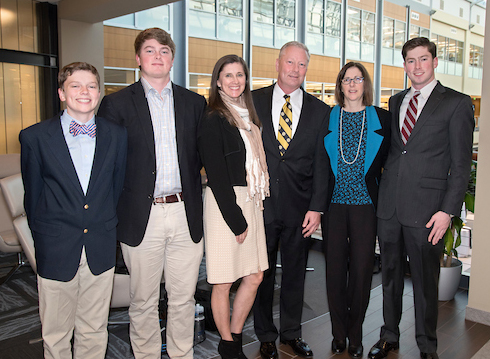 Watching as Alzheimer’s disease quickly dimmed the life of their patriarch, a family from Texas became determined to make a stand.

Doug Hartman saw how the disease was claiming the life of his father, David, and he chose an investment in medical research as his way of making that stand. The challenge he issued has made a difference at Wake Forest Baptist Medical Center and holds the promise of improving lives everywhere.

The Million to Million Challenge

The Medical Center built a strong foundation in aging over many years, and numerous philanthropic commitments played a role. Notably, gifts from the Kulynych family established the Roena B. Kulynych Center for Memory and Cognition Research at the Sticht Center on Aging.

So it was understandable that Doug Hartman considered the Medical Center when he took a deeper interest in Alzheimer’s research. He visited the Medical Center in 2013 to learn more, toured the Sticht Center and met with Suzanne Craft, PhD. She had come to Winston-Salem in 2012 and brought a world-renowned Alzheimer’s research team with her from the University of Washington at Seattle. 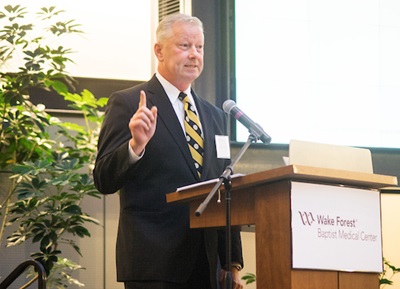 Hartman was impressed. By mid-2014, he and his family decided to support Craft’s research with a gift through the family’s Hartman Foundation, based in Austin, Texas.

Because the Hartmans wanted the funds to produce the greatest impact possible, they issued a challenge:

If the Medical Center raised $1 million for Alzheimer’s research, the foundation would donate $1 million—a 1:1 match.

Alumni and friends of Wake Forest Baptist met the Hartman Challenge, with a variety of contributions, from relatively modest annual fund donations made to the Alzheimer’s Research Initiative Fund to larger gifts. Funding from the challenge was put to work immediately.

It provided seed funding for research projects that eventually earned larger awards to continue the work. One project was a two-year study by Craft and her team that examined abnormal shifts in brain metabolism that occur at the earliest stages of Alzheimer’s and whether these shifts can be corrected with medication or lifestyle interventions.

The funds also provided for staff support to help identify populations who are underrepresented in clinical trials but are at greater risk of the disease, and to raise awareness about the research program and the need for further funding.

The designation came with a grant worth $8.7 million.

“The gifts we received through the Hartman Challenge allowed us to establish the infrastructure to grow a nationally recognized research center,” Craft says.

The center is one of only 31 NIH-funded research centers in the country. It serves the Southeast, which is the U.S. region with the highest per capita rates of Alzheimer’s and other age-related cognitive disorders. Its work focuses on the role played by vascular and metabolic disorders in the occurrence of the disease.

“We have a mandate to cure Alzheimer’s disease by 2025,” Craft says. “That’s a goal that has been set by the government, and it’s a goal that each of us who has done this research for most of our professional lives embraces.”

She counts donors as a part of a team that includes nurses, physicians, researchers and patients and their families.

“All of us are working toward the same goal: a world without Alzheimer’s,” she says.

The Hartman Foundation fulfilled its final challenge commitment in spring 2016, just a few months before the NIH announced its multimillion-dollar grant. For Doug Hartman, the effort was not about money. It was about the future and about honoring his father, who died in November 2015.

“Alzheimer’s robbed this world of a great man,” Doug Hartman wrote, “but maybe we can prevent this from happening to more good men and women in the future.”