The History of Brenner Children's

Through a generous gift from the Brenner family in 1986, the long-awaited dream of a children's hospital to serve our region became a reality.

The gift resulted from the Brenner family’s appreciation for the community in which they had built several successful businesses.

Frank Brenner came to America from Latvia in the early 1900s, and in 1921, started a small junk and scrap metal business in Winston-Salem. He and his wife, Jennie, instilled a deep appreciation for charitable giving, even when times were tough, in their sons—Morris, Abe and Herbert.

Business was difficult, especially during the Great Depression. The sons eventually inherited the business, moved into leadership roles between the 1930s and ‘50s, and began building what became a successful conglomerate known as Brenner Companies.

They founded the Amarr Company in 1951, which became a major operation with plants in five cities, and later added the building-components company Brenner Steel, and Sanitary Container Service.

Morris died of cancer in 1978, but the business continued, with the surviving brothers and their families leading it.

By the early 1980s, the Brenners had decided they wanted to do something of major significance for the people of their community. Manson Meads, MD, then director of the medical center, interested the family in financing the Brenner Center for Adolescent Medicine, which was established in 1981. 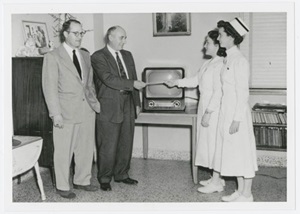 Jimmy Simon, MD, then chief of pediatrics, began discussing with the Brenner family his dream of creating a major hospital devoted to children’s medicine. Herb, by then a member of the medical center’s board of visitors, took the idea to the family to talk about being involved in financing it.

The Brenners worked with medical center leaders to plan the hospital. Those leaders included:

The founding of the children’s hospital was announced in May 1986, and in 1989, it moved into its own dedicated space in the North Tower of what was then Baptist Hospital.

Between July 1989 and April 1990, Brenner Children's moved its facilities to a three-floor unit in the North Tower. In April 2002, Brenner Children’s celebrated the grand opening of Ardmore Tower West, where it is currently housed. The facility consists of 160 private rooms, six playrooms, an interactive video wall and a rooftop garden with playground equipment.

In gratitude, the Winston-Salem Chamber of Commerce presented the Brenner family with its 1989 Community Service Award.

In accepting the honor on behalf of the family, Herb Brenner said, “We’re grateful to have been able to earn more in life than we need, so that we can give some of it back to Winston-Salem.”

Compiled from news reports from the Winston-Salem Journal.

Each year, more than 4,500 children are admitted to Brenner Children's. In addition, over 21,000 pediatric subspecialty visits occur annually at the hospital-based outpatient clinics.